When I'm not making custom wedding signs and the like, I spend my weekdays as web developer at a company called Drip. As last year came to a close, our leadership team asked me if I could help to make some awards for our year-end celebration by laser etching some wooden oars. I was glad to help, and excited to show the process in this video! 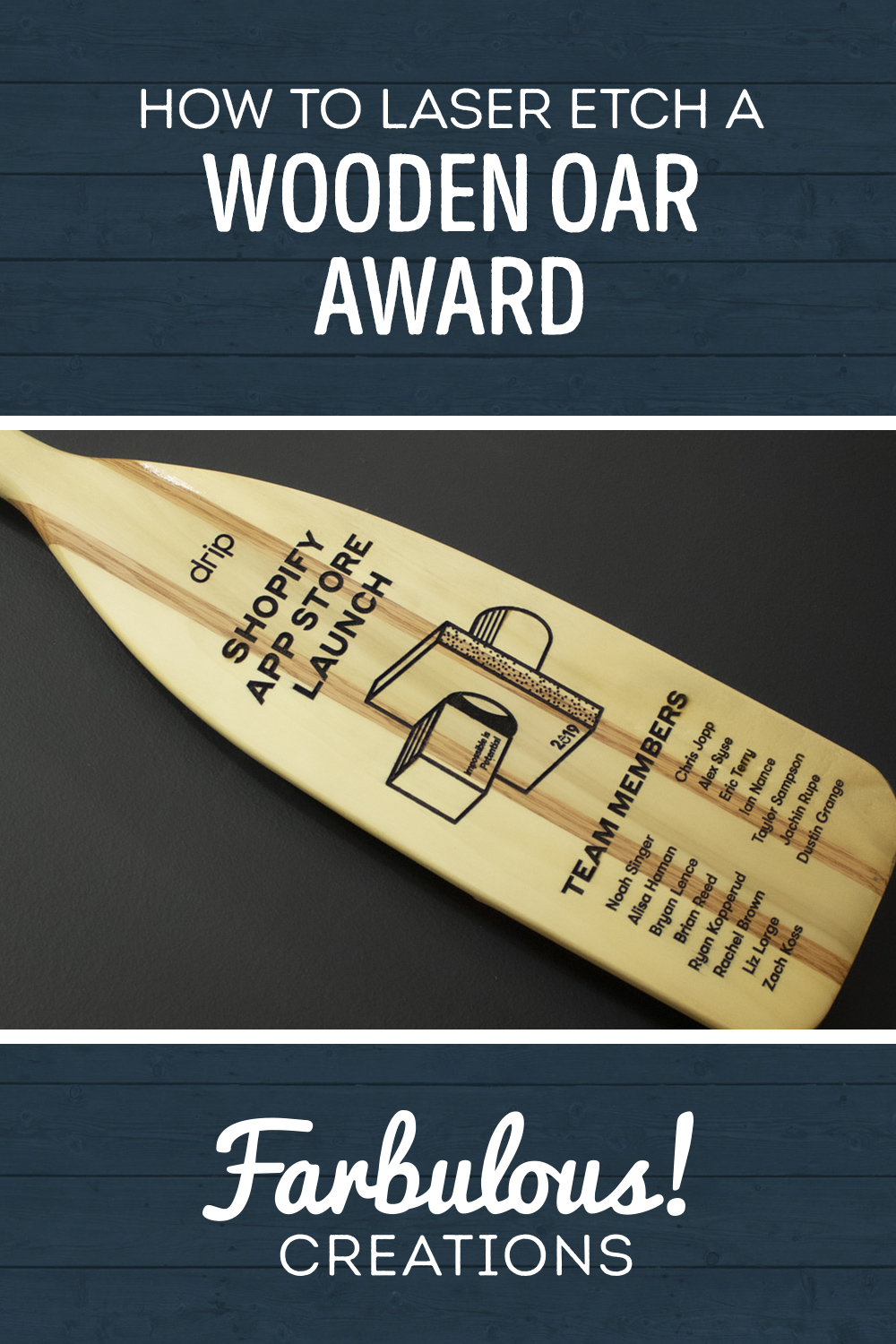 Welcome back to Farbulous Creations! I’m Ron, and in this video we’re going to review some awards I was asked to make by my 9 to 5 for our year-end 2019 celebration. When I’m not making custom wedding signs and lasering etching custom baby blocks, I spend my weekdays as a Senior Web Developer at Drip. Now there’s a lot of industry-specific lingo in our space, like “SaaS” and “martech”, so to describe Drip briefly without any of that jargon, Drip is basically a platform that makes it easy to send relevant and targeted emails to your customers if you sell just about anything online.

One of our internal cultural symbols at Drip is the “oar,” with the idea that members of Olympic rowing teams all need to be 100% in-sync with one another and give it their all in order to compete in such a high-endurance sport. As such, comparing the competitive field we’re in with that of olympic rowing makes a lot of sense, hence the oar.

Last year, our leadership team decided that they wanted to start the annual tradition of presenting an award to a group of employees that had worked on a big, high-impact project during the course of that year, and they wanted that award to be a physical oar itself. They asked me if I could help by laser etching artwork onto an oar that they supplied me. I was glad to help out with the project, and it turned out great! But! I wasn’t making videos last year, and I am now, so when they asked me if I could help out again this year, I was excited to show the process! With that big ol’ intro out of the way, let’s jump in!

To get started, I had the ever-so-slightly tedious task of enveloping the oars in painters tape. I would eventually be painting the inner portions of the etched design with black spray paint, so applying the tape before etching would allow me to paint “through” the tape while preventing over-spray on other areas that wouldn’t be etched. This isn’t something I normally bother with when I laser etch wood, for a few different reasons. For one, I normally don’t paint the inner portion of etched designs because I’m usually working with a piece that’s a single species of wood. As you can see, these oars are made of what looks to be maple and cherry and the two different colors will also be two different levels of darkness once etched. So to make the design look cohesive, we’ll want to paint it. The other reason I’m taping the oars up is because these are pre-finished with shellac. When wood is unfinished, you can just sand off the areas that got a touch of over-spray before applying a final finish, but since these already have a clear coat, I want to protect that finish as much as possible. Oh, and since we have two offices at Drip, I had two identical oars to tape up, etch, and paint.

After both oars were entirely taped, I could set the laser up for the etchings. The laser here at the maker space I attend is on the larger size when it comes to lasers – it’s cutting bed is 36” wide by 24” tall. While that is indeed large, these oars were even larger, so when I did these for the first time last year, I had to get a little creative with how I went about the etchings.

The laser has a sensor on the door to make sure the lid is closed while etching to protect you from beam should something go terribly wrong. I don’t know what the exact threshold is, but I discovered that as long as the door is within 1 inch of being completely closed, the laser thinks it’s closed and will fire normally. Luckily, the handle of the oars is about that thick, so I could simply hang the oar out the front of the machine and do the etching like this in two separate parts.

Now because of the non-standard shape of the oars, and because this older laser doesn’t have internal cameras to help with alignment like newer systems do, I placed a piece of cardboard down on the cutting bed so that I could “draw” myself a guide roughly the shape of the oar. Apparently there’s some variation in these oars at the company who produces them, because this is the same oar we ordered last year and this one was larger than my template from last year. Realizing this, I re-drew my template with the larger dimensions keyed in.

Before etching, I had one more step to ensure a successful etching. The oar is naturally wobbly, due to its shape in its Z-axis. To help compensate for this, I weighed down the handle with a brick and used pieces of metal underneath to act as shims and support the head.

Then it was time for everyone’s favorite part, the lasering itself! I upped the resolution to around double what I normally do since there were some fine details in the design and I wanted to make sure they weren’t pixelated. Despite the increased resolution, even with this being a larger design, the laser made pretty quick work of it because the design is so narrow on the X-axis.

After the laser had done all the hard work, I was able to inspect the etching. It came out great, and I was quite pleased! You can see, however, why I think in-filling the etching with paint is necessary, since the portion towards the middle of the design is darker than the outside parts due to the different species of wood. Painting the etching will prevent that from being a distraction in the end result.

But before I could get painting, I had to etch the handle too, so I again drew myself a placement guide in the approximate shape of the oar’s handle and then placed the oar down and again weighed it down. This design finished much quicker, as it was simply the Drip logo along with the year.

After the blade, grip and shaft were all etched, it was time for the paint.

Now I mentioned earlier these were prefinished with shellac. I know this due to my experience with last year’s oars. Some spray paint was able to leak underneath my tape in a few places and I thought sure I was going to have to sand and refinish, or at the very least, use mineral spirits to clean up the paint and then touch up the finish. Much to my delight, however, mineral spirits took the oversprayed paint right away and didn’t damage the finish at all. I discovered later that was because the oars were finished in shellac, which is sensitive to alcohol, but not mineral spirits.

But that was last year, and I wanted to test to make sure that was still true. So before painting the etching, I placed a small dab of paint on the back of the oar’s handle to see if mineral spirits again removed the paint without harming the finish, just in case I had to clean any paint off the front again too. Again, much to my delight, the finish held its sheen without any issue. So it was time to get painting.

Now I normally make sure to wear proper breathing protection when I’m spraying finishes and the like, but the spray room at the maker space has really good ventilation and basically replaces the air in the room every few minutes or so, so it wasn’t overly necessary here. Plus I forgot my mask at home.

Once the paint was dry, it was one of my least favorite parts of working with taped off designs: dealing with all the itsy bitsy pieces of tape that stay behind in letters with holes in them. I believe vinyl cutter folks call this process “weeding” – well, I don’t like weeding in the garden and I don’t like it here either. But it was worth it, because as you can see, the paint helped make the design a single, cohesive color and really made the design “pop” above the light colored wood that it’s etched on.

And, just like last year, I did have a bit of paint leak underneath the tape and make the whole thing look a little sloppy. But luckily a paper towel dampened with those mineral spirits and a little elbow grease made quick work of it and cleaned the paint right off.

And that was that! With the oars finished up, I could put them back in the box and take them back to Drip HQ in preparation for my teammates to be recognized for their hard work on this year’s Shopify App Store launch. Great work, you guys!

So there you have it! I know laser etching an oar isn’t a super-common project, but it’s nice to have those types of projects occasionally thrown at you as an exercise in problem solving. I’m glad I figured out that the laser would still fire with the lid slightly ajar, because my backup plan was going to originally involve cutting the oars in half and then repairing them after the fact – something I was really hoping to avoid if possible.

So if you like watching the process behind laser etching something a little atypical once in awhile, be sure to subscribe so you know the next time I release a project like this. I really appreciate the support! Thanks for watching!

Looking to laser etch an oar yourself?