My family started celebrating Dia de Muertos a few years ago to honor my husband's Mexican heritage. After watching and falling in love with the movie "Coco", I decided I wanted to add "papel picado" to our "ofrenda" and build on our celebration of the holiday by using my laser cutter to cut various custom papel picado designs out of colored paper. 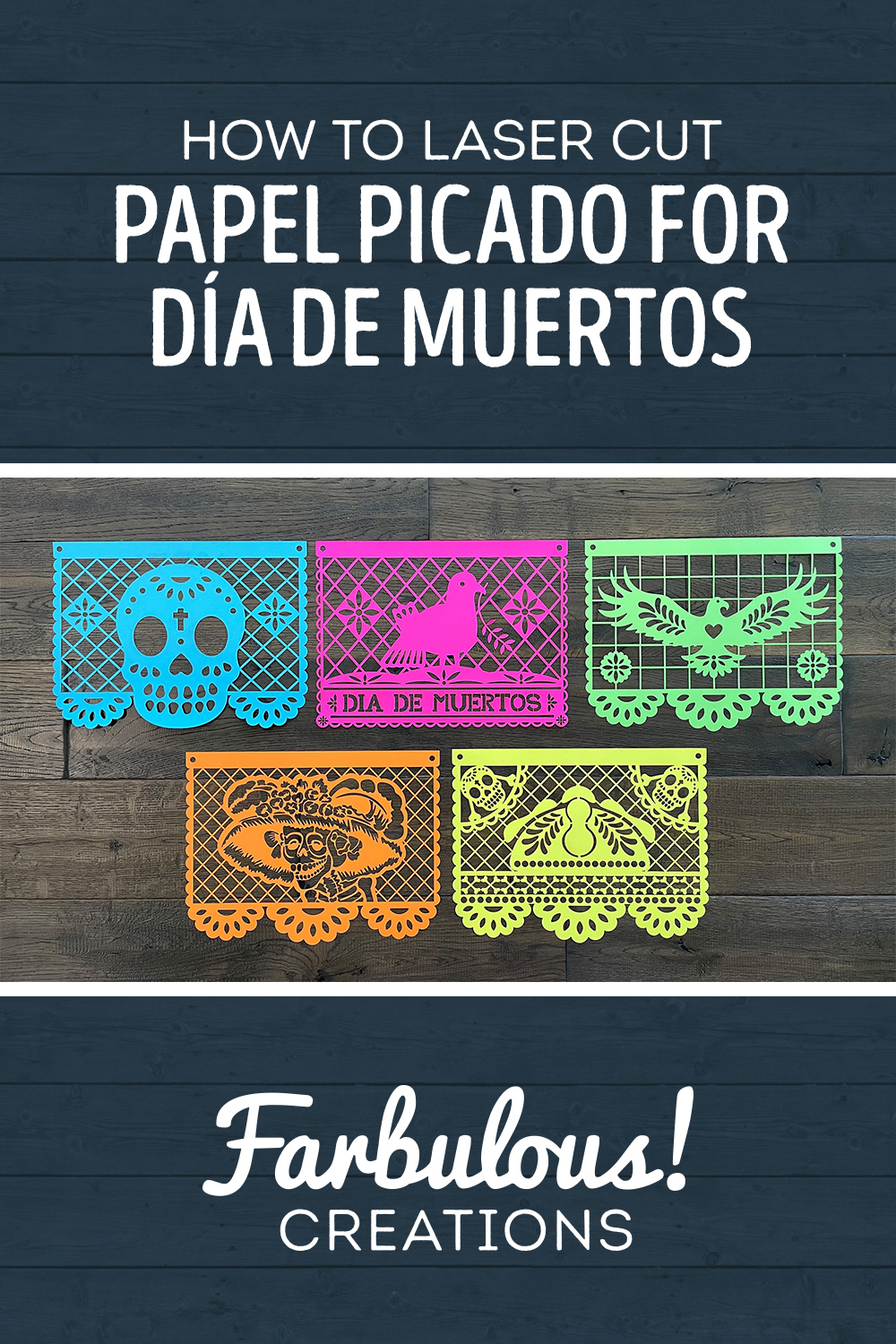 Hi there, and welcome back to Farbulous Creations! I’m Ron, and today we’re going to look at making laser cut papel picado to decorate for Dia de Muertos, a Mexican holiday that my family started celebrating a few years ago after watching and falling in love with the movie Coco. If you haven’t seen it yet, I highly recommend it – it’s a beautiful, touching story and, from what I’ve read, does an excellent job of being culturally accurate in everything it depicts. So if you haven’t seen it yet, add it to your list, and let’s jump on in!

If you’re not familiar with papel picado, you may be wondering what it is. I believe the literal translation is simply “perforated paper” but it’s a traditional paper craft in Mexico done by skilled artisans stacking sheets of tissue paper together and then cutting designs into them with a chisel. Once done, the individual sheets are hung from string or wire through the streets and indoors for various occasions, including weddings, birthdays, and of course, Dia de Muertos, which was beautifully animated in the movie “Coco” to tell the story of Miguel’s ancestry.

As with most things that are traditionally done one way, when you have a laser cutter you find yourself inspired to use it instead. That’s not to say this is a better way – in fact, I’d argue that hand cut designs are far more impressive than having a machine do it – but since I’m far better at digital design than I am pen-and-paper design – or in this case, chisel and paper design – I’m going this route, using a ton of reference imagery of real papel picado designs I found across the internet. I also tried my hand at a few custom designs after basically tracing a few of the others I had found. But, if you don’t want to do this, you can find some free files online or buy them from a stock vector site like Creative Market or even Etsy.

While I continue to show you my design process, I’ll tell you a bit more about how we came to celebrate Dia de Muertos ourselves. My husband has some Mexican heritage on his mom’s side, but none of his immediate family had ever celebrated it. After the passing of his maternal grandma a few years ago – which, coincidentally was around the time “Coco” came out where we fell in love with it’s touching story – we decided that we wanted to start celebrating “Dia de Muertos” to honor that Mexican heritage. I’m big on tradition, after all, and I love finding new traditions we can start as a young family.

I really love Dia de Muertos as a concept, too. It’s a wonderful holiday akin to Memorial Day, but at least in my opinion, way less somber and more a time to celebrate the lives of those you’ve lost in a joyful way, by telling stories about them and thus keeping their memory alive. The traditional way of celebrating is by creating a sort-of altar called an “ofrenda” with photos of your deceased loved ones and offerings of their favorite foods. This is a photo of our first ofrena last year, and part of the inspiration for this papel picado project was to add more traditional elements to our display.

Alright, let’s get to cutting these out. I’ve never cut paper on my 80 watt Thunder Nova 35 before, but I imagined the settings needed to be pretty darn low. I planned to cut these on colorful paper once I dialed my settings in, but I didn’t want to waste that fancy paper for testing so I used regular printer paper as a stand-in to start out. You may recall I mentioned that tissue paper was traditional for this craft, but I imagined tissue paper was far too delicate for laser cutting – it would probably go up in flames as fast as dryer lint does when used as fire kindling and I didn’t feel like breaking out my fire extinguisher.

After confirming my settings of 400 mm/s and 100% power, scaled to 5% power via shape properties in Lightburn worked with one sheet of paper, I decided to try the same settings through 5 sheets at a time to see how that fared. It cut through just fine, but I observed that there was a small amount of brown burnt residue that got trapped between the layers of paper, and it didn’t rub off easily. Since this wasn’t a problem with the individual test sheet, I imagined this was due to the laser vaporizing the additional material and it getting trapped in the tiny air pockets between my pages. But, still wanting to cut multiple sheets at once to save time, I decided I’d split the difference and cut 2-3 sheets at a time to minimize that residue. I also convinced myself that the residue probably wouldn’t be as visible on the colored paper as it was on the bright white printer paper. Besides, these aren’t going to be observed close up – they’ll be strung on a string and hung up above head-level in most cases, so minimal charring on the edges shouldn’t matter.

Now let me just say, watching the laser zip about the laser bed flinging paper around, despite my high-speed air assist being turned off for the cut layer, was super fun to watch, but even more so when the stack of papers is made up of different colored sheets. It’s like a confetti maker of sorts. Since this part is so satisfying and fun to watch, I’ll let the rest of the job play out here, but I’ll speed it up a bit. Feel free to skip past this part if you just want to see what it looks like once the laser is done.

Of course, all parties have to come to an end, and if that party involved confetti, a vacuum will definitely be necessary to get the confetti out of all the cracks and crevices. And even if you think you got it all, you’ll still find it in random places in the weeks or months to follow.

With our cut bed cleaned up, let’s take a look at our completed sheets of papel picado! I was so pleased with how well these turned out, and how quickly they cut too! Like I said, I ended up doing 3 sheets at a time max, so since I had 5 colored sheets, I did a couple rounds with 3 sheets and a few rounds with 2 sheets. It’s common to have multiple “instances” of one design throughout a banner, appearing in multiple colors even, but it’s still nice to mix it up a bit, so I ended up cutting 5 different designs for my banner. The different designs took about 2-5 minutes each, depending on the complexity of the job. I’d like to add more variety in the future, but creating the individual designs takes a bit of time, so I’ll let it be one of those things I build up over the years.

With all my designs cut into all the beautiful colors, it was time to string them up! I didn’t cut holes in the corners of my sheets with the laser because I was unsure how I wanted to mount them to the string – whether with holes, or with tape, or some other method. After some testing with my white test sheets, I determined a hole in each corner would work just fine, so I used a hole punch tool to add these after the fact; next year and going forward, I’ll just add the holes to the designs to have the laser cut them as well.

Next, I measured a length of string with the approximate width of our dining room opening with the amount of sag that I wanted in the line, then I could begin adding my papel picado. Before I added them to the string, however, I laid out the sheets out on the floor, alternating colors and designs so that I was happy with the layout and order before going through the work of stringing them on there – otherwise it could be annoying to need to unstring them if I didn’t like how it looked after hanging it up.

With the order determined, I began “threading” the sheets one by one, with the string entering the hole on the left of each sheet, coming around the back out through the right hole, and repeating this on each one.

After they were all threaded, I carefully secured one end of the string to the wall, followed by the other end and then I could adjust the spacing of each sheet to make sure everything was even. And with those final tweaks, this project was done, and our ofrenda became that much more festive.

This video is obviously going out before Dia de Muertos, but the day and night of, we plan to make some “pan de muerto”, a sweet, orange-flavored traditional Mexican bread that is made for the celebration. We’ll also be serving foods that our departed family members enjoyed, and telling stories about them and their lives as we share the meal with them in spirit.

So there you have it! I hope you enjoyed seeing how I developed these sheets of papel picado, as well as learning a bit more about Dia de Muertos if you were previously unfamiliar with it.

Like I said earlier, I can’t recommend the movie “Coco” enough if you’d like to learn more about Dia de Muertos; it’s definitely become an annual rewatch movie for our family.

On that note, does your family celebrate Dia de Muertos? I’d love to learn about your traditions down in the comments if so!

Beyond that, I hope you enjoyed this video and learned something new! If you did, feel free to like and subscribe for future project videos like this from me, and until then, cheers!